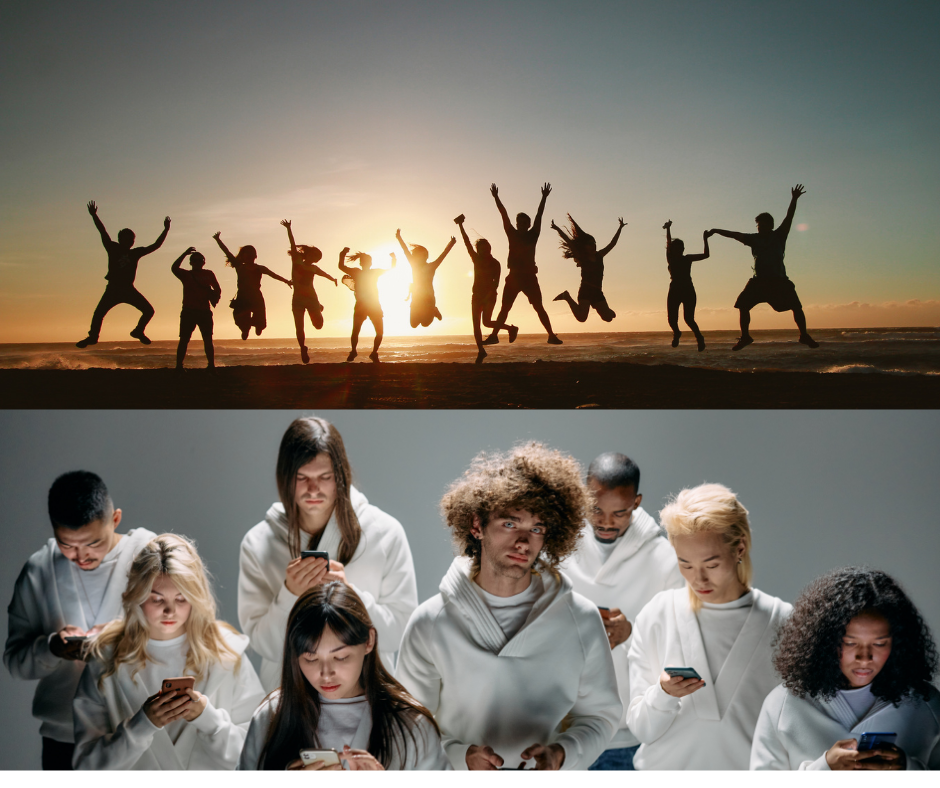 We may be able to surf the world on the web from our phones and IPads, but vibrant living and real connections, are not found through addictively ooking down at electronic screens.

A boy, about nine, and his sister, between the ages of four and five, stand in line at a retail store.

The little girl, twitchy as they are at that age, body moves all around, but her eyes stay glued on a device where she was streaming a video. The boy also moves about, but his eyes are glued to his iPad.

Oh, hark, after some time, they “awaken” from their electronic fixation!

They look around and at each other as though each has magically been dropped from Mars or some other alien planet. Then, yes, you guessed it, they do not speak but decide to capture a “selfie” moment.

And so, they pose, heads together, snap, click–and they returned to their screens.

The next example is about a boy playing games and surfing the web from his iPad.

He got into trouble, broke the house rules and his parents take his iPad away for a month.

Before the incident, he appeared shy, introverted, and lethargic and kept holed up in his room a lot.

At the end of the month, his parents noted a remarkable difference in him.

He began interacting with family members and friends. Humor emerged—he was animated and laughed more.

What was most positive was he began creating his own “play.”

Turns out he is very creative with his hands and loves to build things.

Lastly, in the third example, a guest came to visit a family, consisting of three kids.

The girl and two boys were entrenched in their “spots” in the “living” room. Two hung out at either end of a large couch. One of the boys was draped over a chair. Each was entranced by their electronics.

For practical purposes, they acted deaf and dumb.

They hardly recognized the guest. When the guest asked them a question. They didn’t hear. The guest repeated the question, reframing it, thinking that might be the issue – no answer. Then the guest raised their voice—still no answer.

They only “woke up” from their electronic trance after their father threw a pillow at them.

The commonality in each of these situations is the addiction creates a downward-looking fixation that renders a life-less-ness, deaf and dumb to the world around them.

Teachers report that many kids can respond if you ask them to do a task, but ask them to use their imaginations or contemplate a philosophical or thought-provoking question and they can’t.

What’s more disturbing is … they don’t want to.

In far too many incidents, “quality” time as a family or with friends looks like all heads are down focused on our phones.

Yes, our electronics have value; but, at what cost? How much do we lose of life’s vibrancy, connection, and compassion by allowing our technology to become a “god?”

Zoning out, getting lost, and becoming a zombie are risky states for wholehearted living.

Here’s to coming out of our fogs, looking out and up, and encouraging our kids to do so.

Imagine the lightness and goodness we might create if we invested the same amount of time on a daily basis connecting with God as we do even in checking in with our phones!